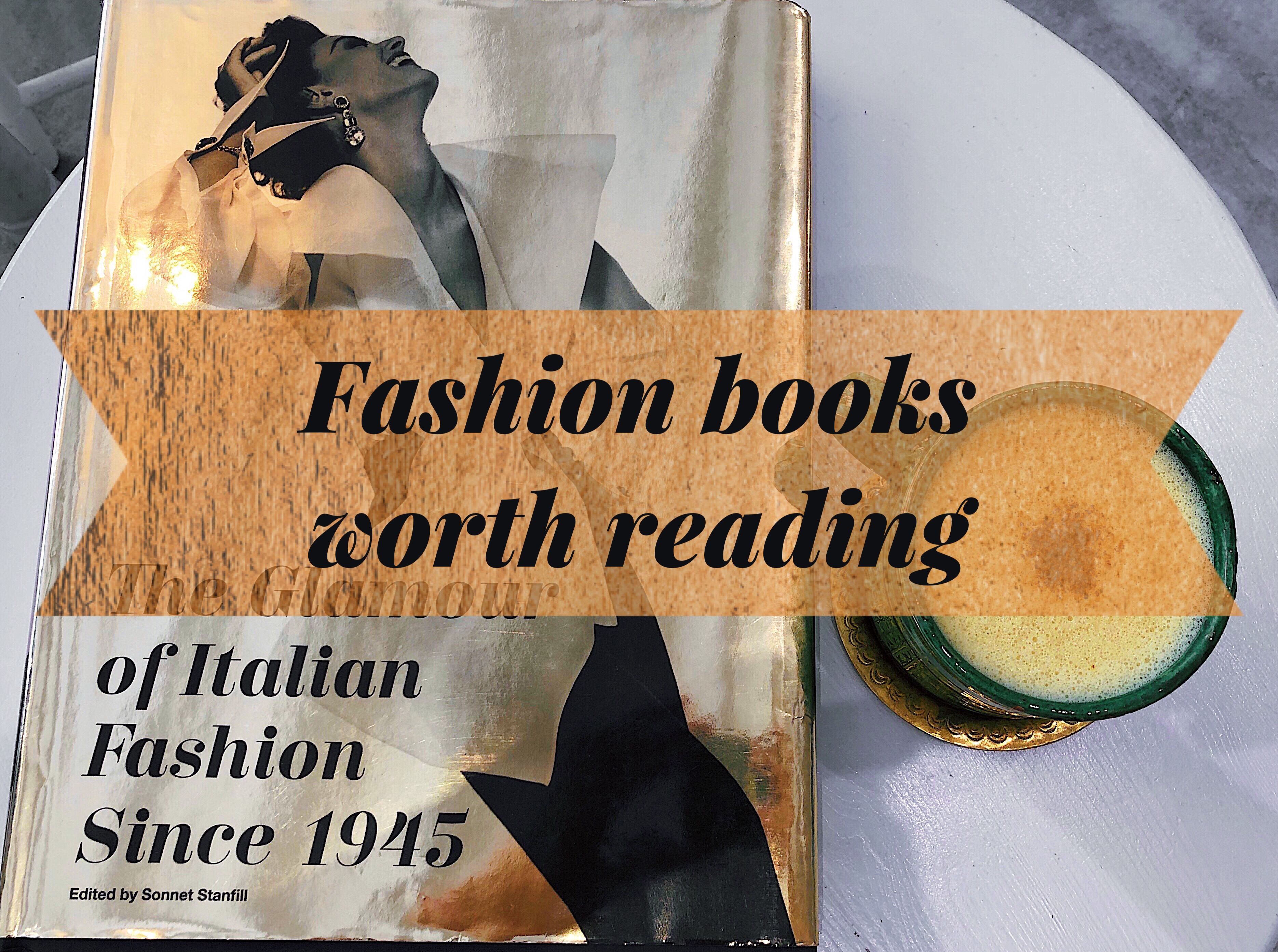 Sometimes I ask myself a question: “What is fashion?”

Is it that favourite top I’m wearing all the time? Or maybe the brand new trend floating around social media? Does fashion enhance only during the Fashion Weeks? Or is it always there, subconsciously pushing us to manifest our characters?

Probably, all those answers are correct. But fashion, above all, is a sort of reference point, a pattern that is related to political, social and religious beliefs. And not to mention the people who make it! Their background, family affairs, and inspirations!

There is nothing more magnetic than seeing how the course of history is changing the lengths of skirts or the heights of heels.

Realising that the Eskimos initially invented parka, Bikini is the name of an island or that warring brothers created Puma and Adidas.

If, like me, you love the historical aspect of fashion, here are a few books that I recommend!

1. ALL ABOUT YVES by Catherine Ormen

It’s a reasonably quick read yet filled with a lot of detailed information on Yves Saint Laurent.

From his artistic childhood in Algeria to a somewhat successful arrival in Paris. We get to discover his first paths as Christian Dior’s assistant and the birth of the iconic YSL brand.

Along with his life and business partner – Pierre Bergé, we travel to his beloved Marrakech, encounter various artists and celebrities, just as Andy Warhol or Catherine Deneuve!

But it’s more than just a biographical book filled with beautiful photos. It’s a sort of interactive confrontation with the creator! The album is filled with copies of original letters, show invitations or even paper dolls that were so adored by YSL!

A must-have on your bookshelf and a great idea for a gift too!

*Buy English version: All about Yves

*Buy French version: All about Yves

Grab a coffee and dive into one of the most adventurous fashion autobiographies!

Not only did Elsa revolutionised fashion by introducing the elements of surrealism, but she also crossed the entire globe to realise her professional dreams.

The outrageous designer talks, with her poetic language, about the famous collaboration with Salvador Dalí that resulted in the Lobster Dress, tricky trompe d’oeil technique and why the pink colour was that shocking!

A very inspiring read with a pinch of humour!

*Buy the book: Shocking Life : The autobiography of Elsa Schiaparelli

3. The lives of 50 FASHION LEGENDS

My very recent discovery! And I can’t help but flip through the pages!

Fascinating biographies of 50 iconic creators told through a time-lapse illustration. A quick note describing the most crucial period of their lives, enriched by a career highlight and a motivational quote.

A fun but effective and smart way to get to know the basics!

*Buy the book: The life of 50 fashion legends

The fundaments of fashion captured within 100 themes and each of them having had an enormous impact on the Western lifestyle and the way we dress today.

Are you curious what nylon is and how was it introduced into a mass culture?

Or maybe what links PVC to Swinging London and Vivienne Westwood to punk rock culture?

If the answer is yes, this book helps you to discover these and 97 other fashion subjects that have influenced our current world order!

She shows her underwear in public, burns the house of a girl she doesn’t like and has unlimited ideas on how to prank anyone who stands on her way!

YSL imagined this character while still working as Christian Dior’s assistant. At the end of a hard day at the studio, one of his designer colleagues dressed up in Dior’s tulle skirt, pulled his pants high and added a little hat – the inspiration was born. Lulu was born!

She is YSL’s alter ego without any doubt, and that’s what makes it so appealing. He was an introvert for the outside world but extremely funny when around his inner circle. And thanks to Lulu, we get to know that part of him.
It received a bad critique- some say it’s crossing the line of being appropriate.
It’s not for the kids, but I like it a lot. It’s amusing if you take it with a pinch of salt 😉

6. HISTORY OF FASHION by François Boucher

I’ve had this book for over 15 years I think, but only now it feels like I was mature enough to read it. Why?

Because it’s not another factual story of clothes, it’s instead an anthropological, psychological, social, and political analyst of motives that pushed humans to evolution – in this case, the one related to apparel.

From ancient togas to modern and computerised fashion. From strict royal etiquette to nudity on the catwalk.

Think of it as a fashion bible.  It’s intimidating, at first, but so captivating and entertaining as you move forward with every single page!

A very rare testimony of creativity of the Spanish designer who adopted himself into a French way of living.

He mastered the fabrics like a real constructor, and he gave soul and class to seemingly simple shapes and patterns. There was something so mystical about his work that some called him a monk of fashion!

From dressing the Spanish royal family to his friendship with Hubert de Givenchy and Marlene Dietrich. This book takes an insight into the creative mind, atelier and classical yet eccentric style of the Basque creator.

*Buy the book: The Master of Us All: Balenciaga, His Workrooms, His World

8. THE GLAMOUR OF ITALIAN FASHION SINCE 1945 by Sonnet Stanfill

When you think of French fashion, you think of Paris and haute couture. The British one? Probably London and the rise of the subculture street style. And American? Undoubtedly, New York and its ascetic form followed by the development of the mass production.

So what about Italian? Shall we relate it with Rome, Florence or maybe Milan? It is much more complicated than we might imagine. All three cities play an equally important role, and each for a different reason.

What’s more, the roots of the famous Italian glamour are attached to the strong position of the local textile and artisanal industry. Think of impeccable leather goods, high-quality knitwear, silk production, ‘on point’ tailoring. And now overlap it with such designers like Emilio Pucci, Giorgio Armani, Ottavio Missoni or Gianni Versace.

It’s worth digging into this book because it’s a real proof of how Italians found a golden mean between the excessiveness and moderate fashion.

*Buy the book: The Glamour of Italian Fashion: Since 1945

9. LETTERS TO YVES by Pierre Bergé

« If Chanel gave freedom to woman, you Yves, gave them power» Pierre Bergé.

I have read this book three times. It’s full of love proofs, juicy gossips, the truth about Saint Laurent. And every single time I smile, I cringe, I laugh, and I cry.

Yves Saint Laurent’s and Pierre Bergé’s love was unconditional yet difficult. It was filled with passion, disputes, love, and betrayal; infused with drugs and alcohol.

Designer’s life and a business partner started writing a personal diary just a few days after Yves passed away as a way of his final confession. And as a consequence, it resulted in this moving book.

For someone who didn’t like talking about himself, Christian Dior did a pretty good job in writing this autobiography!

He was modest, meticulous, a true artist who perceived and created fashion through social aspects. And that’s precisely how his famous ‘New Look’ was born.

It was 1947, World War II was still reaping its harvests, and food, clothes, books or even the fabrics were roughly rationed.

Dior being an old-fashion gentleman craved for the woman to look feminine again! He envisioned them as flowers, with rounded shoulders, tight busts and oversized skirts that required meters and meters of tulle. To put it in his own words – he wanted to « bring back the neglected art of pleasing ».

That’s just a sample of a fascinating self-portrait sketched by the French couturier. For more, read the book!

11. KING OF FASHION by Paul Poiret

Very few might recognize the name of Paul Poiret. Probably, even less of us realize what an import figure he was in the whole history of fashion!

Imagine that it was him that freed the woman from the painful and awful corsets replacing it with a much more comfortable…bra.

It was none other than him that popularized the controversial ‘Alladin’ pants, introduced multiculturalism into fashion and even – as the first one – launched a perfume as a marketing tool of his couture house.

And all that at the very beginning of the twenty-century!

Now imagine this fast-forward creativity, the Art Deco spirit and oriental touches told by the master himself.

What a fairy tale that only real life is capable of writing!

*Buy the book: King of Fashion

I would love to know about your favourite fashion titles!